Impact can be Dangerous, and Costly

When we think about occurrences of workplace violence perhaps we think of harsh words in the parking lot between spouses or over the phone, possibly even an angry boyfriend comes to the place of business and harasses their partner in the cafeteria or in their office. However, workplace violence can have a much darker and more dangerous form than a nasty argument. Serious incidents of violence can throw an enterprise into chaos for hours, even days with all the attendant loss of productivity, morale, and even reduced profits or service levels.

Some years ago in Ohio, a woman who worked at a car assembly plant disappeared (she would never be found). She was last seen in the late afternoon on the factory floor. As a result, the plant became an active crime scene and the police shut it down for a number of days. Now, begin calculating all the costs and dislocation stemming from the possible disappearance of just one person from a place of business—you can easily see that workplace violence is not a small matter and management must weigh the risks and impacts of such incidents. 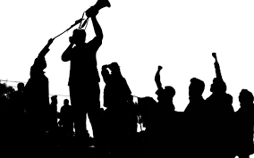 Another form of violence can be public protests. Some businesses are politically vulnerable and subject to public protesting, vandalism and potentially, violence. Recently a large group of protestors invaded the main floor in a building occupied by a well-known financial company. Their goal was to protest and physically prevent employees from conducting business in the banking area and they were successful. While fortunately violence did not break out in this instance, employee productivity and morale suffered. And of course, the incident made the news, causing a great deal of negative PR.

About 27.3% of women in the United States—or 1 in 4 women—experience domestic violence, which can spill over into the workplace, reported Jim Sawyer, Director of Security Services at Seattle Children’s Hospital. According to Sawyer, security managers tend to focus on preventing active shooters but should also understand that many active shooter incidents originate from domestic violence, so both must receive ample attention and priority.

Keeping the Violence Out of your Building

Many enterprises have crisis management plans that are activated in an emergency, but many of those same enterprises and their security teams haven’t examined what they could do to head off workplace violence incidents before they begin.

There are many strategies and methods to attempt to mitigate violent incidents in the workplace, ranging from observation and reporting mechanisms to protocols for reporting lower-level incidents to training staff to recognize troubling situations and unwanted behaviors. All of these are important and effective, but they are only part of an effective prevention strategy. 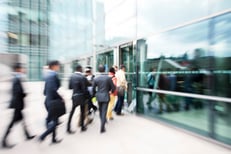 Among the many, integrated methods and tactics for detecting possible workplace violence and mitigating it once it has happened, there is one tactic that is proven to reduce the risk and impact of domestic violence entering the workplace: stopping the potential assailant at the building entrance.

One of the easiest ways for a person to enter a workplace, even a “secure” one that uses access control, is by following someone through a swinging door. This action is known as “tailgating.” However, the right security entrance, at the perimeter or entry, when paired with an access control system, can effectively eliminate the risk of unauthorized entry into the workplace to do harm. The right entrance can also ensure that the access control system can accurately describe who is in the building at any point in time, which can be crucial if there is a crime investigation.

There are many types of security entrances with different capabilities. Security tripod turnstiles can be placed just inside buildings (typically in the lobby) to provide a strong, visual deterrent and barrier to casual entry. A special turnstile with sensors, known as an “optical turnstile” can detect tailgating when it happens and sound an alarm. Even full height turnstiles can be used in building interiors (local codes dictate where they can go related to emergency egress). All three turnstile types require manned supervision to monitor and respond to infractions and all three make the duties of guards much easier.

Heavy duty physical security entrances also exist: security revolving doors and mantrap portals can be deployed at employee-only entrances to provide reliable tailgating prevention without manned supervision, due to how they operate. When an employee provides valid credentials, and enters the security revolving door, if someone tries to follow in the next compartment, the door’s ceiling sensors detect the presence and stop the door’s rotation. The valid user steps out and the unauthorized user is rebuffed. In addition, let’s say someone grabs a hostage at the entrance and tries to forcibly piggyback in the same compartment, the sensors will detect two people, reverse rotation, and rebuff both people. Either way, the unauthorized person who is intent on causing some kind of violence within the building is effectively stopped from getting to his intended targets.

Sadly, workplace violence is not going to go away anytime soon, but there are methods and resources to reduce the risk of becoming subject to a crime scene investigation. Security entrances, when deployed correctly, and integrated into larger operating procedures and access control/visitor management systems can effectively and significantly reduce the threat of violence entering your workplace.